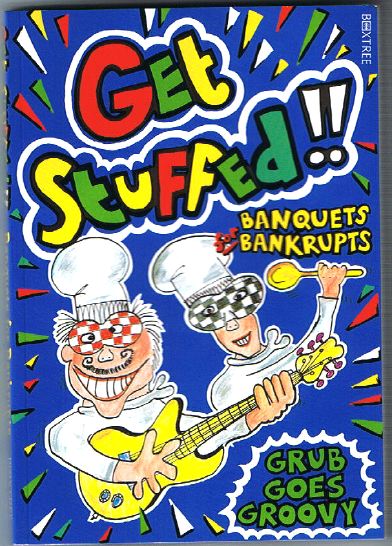 HOME
THE START OF THE
MYSTERY CHEFS 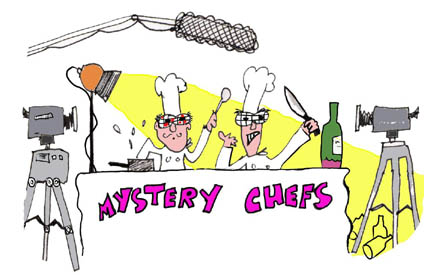 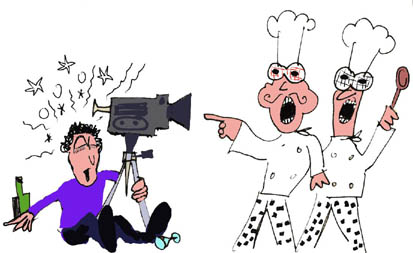 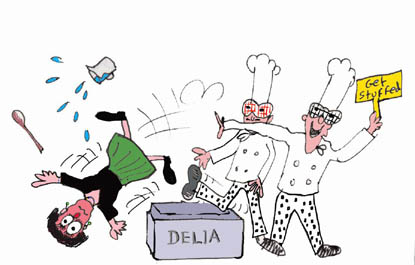 This is why shambolic people don’t usually get employed in the television industry. (Last Ditch Television had always guessed that there might be a reason). 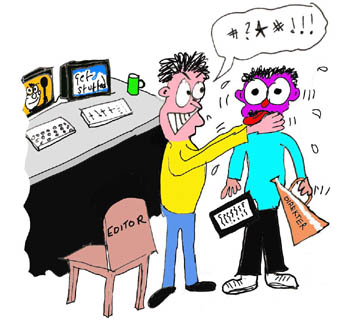 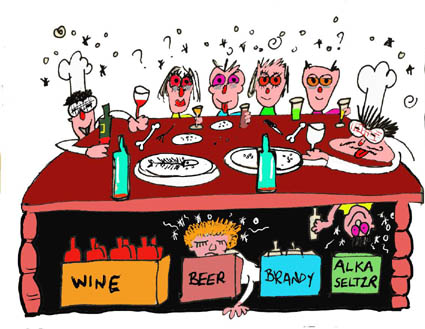 This is why there are so many recovering alcoholics in the television industry. (Last Ditch Television had always guessed that there might be a reason). 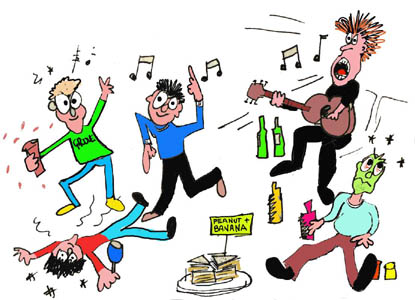 And this is why nobody ever has the heart to completely erase their shambolic, loony-drunk friends from their lives, their address books and their Christmas card lists. (Last Ditch Television had always guessed that there might be a reason). 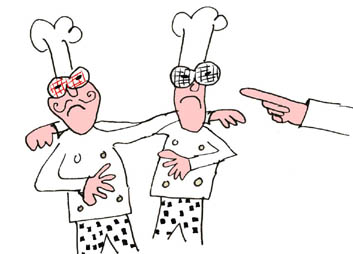 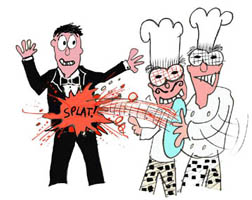 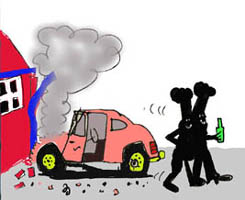 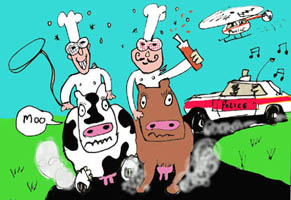 The Mystery Chefs deserve explanation. You’ll find a little bit about them in the FAQ section of this site but, since so many people have been asking for greater details, we feel that some extra words may be due.

People want to know why they were allowed onto the show in the first place ...
In the very beginning of “Get Stuffed” there were no Mystery Chefs and, in a million years, it was never planned that those idiots should get anywhere near a camera.
Nevertheless, the Mystery Chefs were friends of the production crew and everyone has friends whose appearance is dreaded as much as it is welcomed. Like those intelligent ghost-busting chaps and their friendship with the useless mutt, Scooby Doo.
At the start of “Get Stuffed’s” production, the first 12 episodes were filmed in a blaze of self-confidence.
Nobody doubted that “Get Stuffed” was going to be a wonderful TV series that would teach ordinary people to cook easy stuff. Patronising, old Delia Smith would be quickly toppled from her pedestal. Yip - yip ...Yippeeeeee. We’d soon save the world from irritating TV chefs.
That was the production team’s earnest mission and it’s what they'd told the Big Cheese in London (see the "Handie Washing" page on this site for more about the role of the Big Cheese in London). The problem was that nobody at Last Ditch Television (the show’s production company) had ever made a TV cookery programme before - a fact that it was best not to  mention. Even more seriously, most of them could barely make toast.
Although making television programmes isn’t rocket science, there is a certain threshold of competence that needs to be attained. Not surprisingly, Last Ditch Television fell well below this threshold and, when the video tapes started getting edited, it soon became clear that various things that needed to be filmed, hadn’t been filmed properly. Often, they hadn’t been filmed at all!
A sackful of money had just been wasted on the first attempt to film your favourite TV cookery series and it was clear that it would never work. The video editor went ballistic and started bollocking the clown who had been calling himself “director”. Others were in tears.
To dumb down the technicalities: not enough “Get Stuffed” stuff had been shot. Crucial sequences were entirely missing and, by now, it was too late to return to the original locations and re-film. This dilemma was quickly blamed on the many lengthy, expenses-paid lunch breaks which had been enjoyed during the filming daze.

There was only one quick fix solution for everyone - More Alcohol.
If you've read this far, then it's time for a short break, so let's all have a quick snort and see what Google Ads want you to buy. (Please buy it).
Meanwhile, industrial quantities of cheap wine & booze were sourced, opened and necked. In the neighbourhood where the series was being produced, an unwanted side-effect of such cork-poppings would always be the immediate appearance of the Mystery Chefs. These were famous local spongers and they swarmed into the office like bees to honey. Everyone has “friends” like that, don’t they?
At this early stage they were not Mystery Chefs. They were just lazy friends cadging free booze. The relationship between the Mystery Chefs and alcohol was exactly like the relationship between Scooby Doo and a “Scooby Snack”. The only difference was that Scooby Doo is cute but the Mystery Chefs are horrid; also, the Mystery Chefs are real people whereas Scooby Doo is just a cartoon dog.

So the evening dragged on and everyone drank and talked, and talked and drank, and sang songs, and blurted drunken babble, and made peanut & banana sarnies, and felt a bit woozy, and had a bit more to drink; until soon it was very late indeed. It was at the hour that “Get Stuffed” usually gets transmitted that there suddenly came a brain wave.
And the brilliant alcohol-fueled idea which saved the day, and which came entirely from the drunken halitosis & chianti-scented gobs of the Mystery Chefs, was this ...
Why didn’t someone simply stand in front of the camera and explain what should have been happening during the bits that hadn’t been filmed?
Brilliant! It’s so simple, you could cry. All the camera equipment, lights, etc. were still lying around before being returned to their rightful owners so implementing this idea took about 10 minutes. A couple of white bedsheets were nailed to the wall and the camera was put onto the leggy thing that television snobs call a “tripod”.
At this moment, someone had the rather smart idea of “mysteryfi-ing” the progenitors of the idea. These were the sort of guys who were always getting into some sort of very bad adventure and “Get Stuffed” already had plenty of problems without needing any extra adverse publicity. If “Mystery Chefs” in disguise got into trouble, it would be far easier for Last Ditch TV to disown them than if they were recognisable. A couple of kiddies’ party masks were quickly found and, “Bob’s your Ankle”, as they say.
The camera was focused by someone too drunk to stand upright. Filming began. The Mystery Chefs blurted out, or demonstrated, the necessary missing information - straight into the camera lens.
Amazingly, next day in the cold glow of the video editing suite, it worked. When the new Mystery Chef linkage material was cut into the badly filmed episodes with all the missing sequences, everything looked perfect. It even looked deliberate.
What happened over the next few months was even weirder.
After solving the problem of how to make television programmes when you have no aptitude at making television programmes, the producers continued to use the Mystery Chefs’ wonderful ruse.
But, as time progressed and as more and more episodes were completed, the production team got better and better at their job. Eventually there were no more cookery cock-ups and no more missing or unfilmed sequences. Last Ditch TV could make TV programmes which ran from beginning to end without any gaps in the middle. Soon there was no longer any need for the Mystery Chefs in “Get Stuffed”.
So they were immediately and quietly dumped.
Twelve episodes were made without any Mystery Chefs but, as soon as these programmes were transmitted, the viewers went frantic. Even people who loathed the Mystery Chefs began banging on the door demanding “Where are the Mystery Chefs?” “Where are the stars of the show?” It seemed that The Mystery Chefs had unlocked everyone’s Bad Inner Culinary Muppet. Compared to the Mystery Chefs, even cack-handed students in Bedsit Land were now looking like brilliant cooks!

So the Mystery Chefs were immediately and quietly reinstated.
And if this all sounds fine & dandy to you, wallowing at home on your comfortable television sofa, believe me - it ain’t.
No sir, it is no fun whatsoever having to put up with the egos of two freaking idiots who break almost everything that they touch, and it is no fun trying to explain to the tax inspector that the huge quantity of alcohol that the show consumes is fuel for its most popular stars.
And it’s no fun clearing up the mess after those B*****ds, or making excuses for their bad behaviour, or the arguments, or the car crash, or the night that they went out cattle rustling, or when they redecorated the kitchen with purple latex paint, or when they pretended that they had been taken hostage by terrorists in a small TV studio (where the Home Secretary, and his many armed bodyguards, also happened to be filming), or when they threw a platter of spag bol at a tuxedo-jacketed, Johnny Vaughn (out of spite), or when they started binge eating (the diametric opposite of a “hunger strike”) for more pay; no Sir, those stage-struck goons don’t amuse me one tiny little bit.
↑
This website uses cookies to improve your experience. We'll assume you're ok with this, but you can opt-out if you wish.Accept Read More
Privacy & Cookies Policy

Any cookies that may not be particularly necessary for the website to function and is used specifically to collect user personal data via analytics, ads, other embedded contents are termed as non-necessary cookies. It is mandatory to procure user consent prior to running these cookies on your website.

SAVE & ACCEPT
This site uses cookies: Find out more.